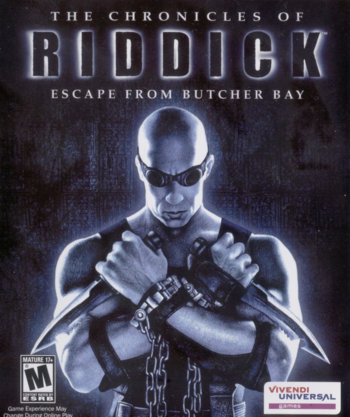 "Darkness... are you afraid? I'm not. The dark is afraid of me."
— Riddick (talking to a guard)
Advertisement:

Escape from Butcher Bay is the first of two games set in The Chronicles of Riddick universe. It is a prequel to the events of Pitch Black. Riddick must escape from the infamous Butcher Bay prison, a feat no-one has ever accomplished.

The facility, constructed on a barren planet, contains three increasingly secure holding areas, and a subterranean mining operation. A captured Riddick is brought to the prison by none other than bounty hunter William J. Johns.

Whilst Johns meets with the warden Hoxie to discuss the matter of payment, Riddick quickly gets to grips with his surroundings and starts a riot. In the confusion, he escapes into the sewer system below the prison. There, after fighting his way through mutants, he meets Pope Joe and a woman named Shirah, eventually gaining his trademarked "shined" eyes. Over the course of the game, Riddick must overcome each increasing security level of the prison before making his escape.

Created by Swedish developer Starbreeze Studios and co-developed by Vin Diesel's own game studio Tigon Studios, the game is a notable aversion of The Problem with Licensed Games, being praised for its story, gameplay, and visuals, and gathering overwhelmingly positive reviews.

A second game based on the Riddick movies was released in 2009, Assault on Dark Athena. It was essentially a Mission-Pack Sequel to the first game, and included an Updated Re Release of Escape from Butcher Bay with improved graphics and some gameplay tweaks.