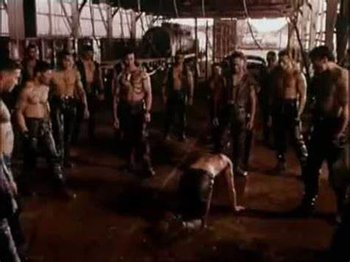 Since criminal gangs tend to engage in criminal activities, they don't tend to let just anyone in. To make sure a newcomer is serious, won't fold under pressure, and can handle themselves, they have to be put into a fight in order to join the gang.

In real life this is called "beating in" or "jumping in", and it tends to involve either the entire gang or at least multiple members all attacking the newcomer together and beating the snot out of the new guy. Obviously the new guy doesn't have to win to get a spot in the gang, (although they will be given extra respect if they can do some damage before being overwhelmed) the idea is just forcing them to show that they want in bad enough to take a massive beatdown to do it.

In fiction there are several common variants to this. The first is that whoever is trying to get into a gang has to fight one on one with one of the biggest, most badass, and/or scariest members currently in the gang, as a sort of Threshold Guardian. (This variant should lead to some major Fridge Logic, since the gang usually has plenty of members that are less impressive than the Threshold Guardian in question and it makes you wonder why they're suddenly so picky about new members.) Generally the newcomer is expected to win in order to earn a spot, but other times it's revealed, (generally after the fight) that the bout was just an excuse to see how they would do, or if they would simply survive. Very similar to this is a prison specific version that involves fighting the meanest, toughest looking guy around in order to earn respect, and (either explicitly or implicitly) to avoid being a target for Prison Rape.

The second variant is the real life version outlined above, and it may be used to underscore a theme about the violence and cruelty inherent in gang life. This generally tends to be confined to either realistic shows or those planted firmly on the cynical side of the sliding scale, because there's somewhat less of a market for watching a hero being stomped by a dozen guys, or showing why a main or sympathetic character would want to join such a group so badly.

A subtrope of Initiation Ceremony and Rite of Passage, while the guy(s) being fought is a subtrope of Threshold Guardian. Compare and contrast If You're So Evil, Eat This Kitten!, which may involve being initiated with some other test of resolve and commitment. This trope usually tends to be used by street level Gangbangers, as organized crime groups like The Mafia tends to favor slightly less crude means of initiation.