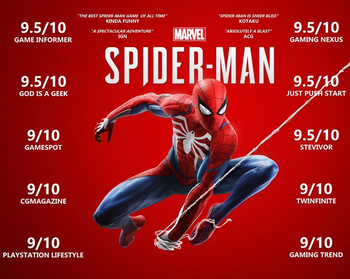 Be Greater... than what's expected.
"There are way too many great licensed games to be so fucking angry all the time. Cheers."
— The Happy Video Game Nerd
Advertisement:

It's widely known that there is a problem with most licensed video games. Quality tends to be low.

This is not always the case, though, especially for long established franchises that do not impose any unrealistic release dates tied to another work's release. These exceptional games are not mentioned as often as are the games with problems. They need more love, and that's what's the Sugar Wiki is for, so let's give them some love!♥

Specific companies with their own pages:

Other examples, by license format: