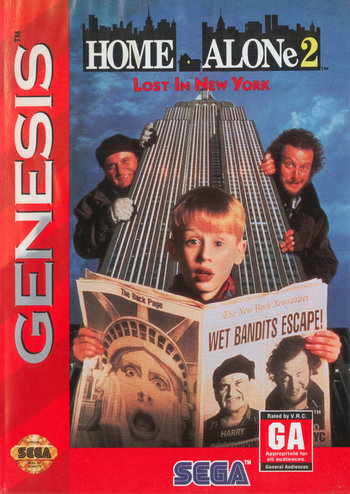 A 1993 Licensed Platform Game For the Sega Genesis, and the sequel to the first Home Alone video game on the Genesis.

Loosely based on the 1992 film, the game is all about Kevin McAllister getting seperated from his family at the airport, and ending up in New York all by his lonesome. Kevin must now brave the tough challenges of New York, as well as fend off the Wet Bandits, Harry And Marv, who are also on the loose and want revenge.

You naturally play as Kevin as he runs and jumps around New York, fighting off enemies and gathering items. In each stage, he starts off with a standard throwable weapon that can be upgraded by grabbing various Power ups to put said weapons together. These weapons are naturally more powerful and more effective at defeating enemies and especially the Wet Bandits, who will show up in each stage to pester Kevin.

Not to be confused with the Nintendo version of the game, released by THQ for the Super Nintendo Entertainment System in 1992.