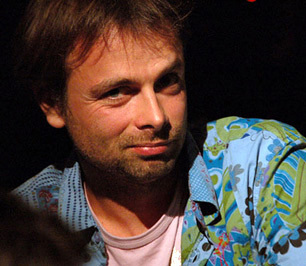 Whatever it is he did to make his games so great, he did it really well, as all of the games he's credited with designing have been greatly received by critics and fans alike. Heck, he was even requested specifically by Peter Jackson to work on a video game adaptation of King Kong because Jackson was a fan of Beyond Good & Evil. As such, it's not much of a surprise that Ancel gets a lot of Creator Worship from fans.

When looking at the Rayman series as a whole, it's interesting to note that the series seem to have a fluctuation in overall reception from game to game — the more positive ones generally being the titles that Ancel himself worked on. Rayman has generally been very well-received as a solid, challenging platformer, and many fans consider Rayman 2: The Great Escape to be the best game in the entire series. He had only an advisory role in Rayman 3: Hoodlum Havoc, which, while not considered a bad game the slightest, is something of a invokedContested Sequel mostly because it doesn't have the same charm as the Ancel-helmed games.

A notable change, though, was the development of Rayman: Raving Rabbids. The game at first was supposed to be a free-roaming platformer titled Rayman 4, as seen in this early trailer.

After the trailer was released to the public, Ancel was notably absent from the project, and by the time the game was actually released as the bundle of Mini Games known as Rayman Raving Rabbids, the only thing he was credited for was character design. Rayman wound up being sidelined by Ubisoft in favor of the Raving Rabbids, until Ancel came back to helm Rayman Origins in 2011, to great acclaim.

Ancel was last working on an open world project called Wild, and on Beyond Good & Evil 2. In 2020, he announced that he was leaving the video game industry

to pursue work at a wildlife sanctuary, though he ensured fans that development on those two games will progress smoothly without him at the helm.