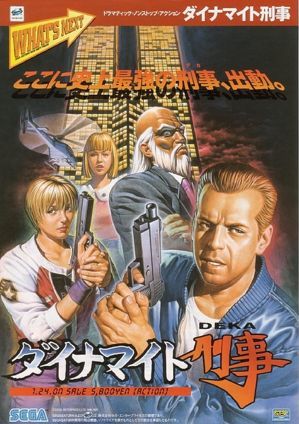 Dynamite Cop (known as Dynamite Deka in Japan) is a small series of arcade beat 'em ups from Sega. It was born in the context when the 3D technology was quickly becoming the industry's standard. The games were designed and directed by Makoto Uchida, who's previously responsible for Altered Beast and Golden Axe.

In this game, you assume a role of Bruno Delinger (and his colleagues), who must rescue a daughter of the United States' president held by terrorists.

Dynamite Cop series is pretty well-regarded for an early attempt at 3D beat 'em up (especially when compared to Eidos' mediocre Fighting Force for PS1), but it's also remembered for its over-the-top humor, topped with 80s action flick cheese. Unfortunately, the series became all but forgotten after the second game, although Bruno Delinger eventually showed up in 2013 crossover game Project X Zone.

Because of Title Confusion between the English versions, the individual games will be referred to as the Japanese ones, in a way like Deka 1, Deka 2, and EX.