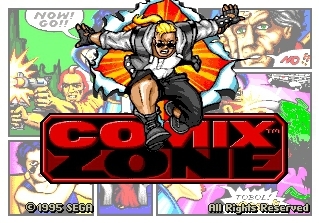 A Nintendo Hard Platformer/Brawler created for the Sega Genesis/Mega Drive in 1995.
Advertisement:

Sketch Turner, a Starving Artist and freelance rock musician, is working on his newest comic book, named the "Comix Zone." Comix Zone is the story of the New World Empire's attempt to defend Earth from an invasion of alien renegades, with inspiration coming from Sketch's (oddly vivid) dreams and nightmares.

One night, while Sketch is working on Comix Zone during a storm, a massive lightning bolt strikes outside his apartment, somehow affecting the comic book too. In this instant, the main villain of Comix Zone - a powerful mutant named Mortus - manages to escape the comic book's pages, and hurl the stunned Sketch (and his now electrified pet rat Roadkill) into the world of Comix Zone. Mortus intends to free himself by destroying Sketch in the comic book, as he is unable to do so in reality.

Inside the comic book, Sketch meets General Alissa Cyan, who believes he is a superhero ("the chosen one") who has come to save their post-apocalyptic world from the evil of Mortus and the alien invaders. Ignoring Sketch's protests, Alissa sends him on his mission, keeping in touch with instructions and hints via radio.

Now that Mortus has a physical presence outside of Comix Zone, he is free to change the world as he wishes, simply by drawing in enemies for Sketch to face - or in one instance burn up part of a page. It's up to Sketch to fight panel to panel across his comic book before a final nuclear showdown with Mortus.

Comix Zone came with a de-fictionalized issue of Turner's comic in the game manual. An actual comic book, produced by Sega, was also sold as a tie-in promotion (similar to Sonic and Kid Chameleon).