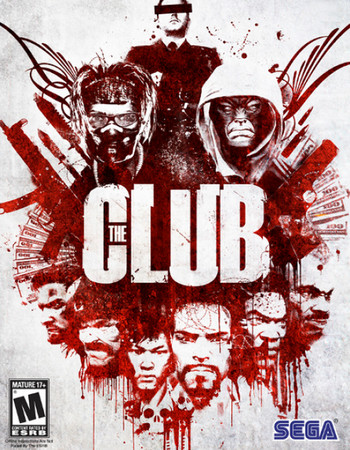 The Club is a Third-Person Shooter game designed by Bizarre Creations and published by Sega in 2008. The main premise resembles the movies The Running Man, Gamer and Hard Target - you have to reach the exit or stay alive for a given time while having to battle waves of Mooks and Scoring Points for chaining kills into combos (the higher combo meter goes, the less time you have to kill the next enemy).
Advertisement:

Each of the eight playable "contestants" has a different background and statistics, consisting of his Strength (misleadingly named, as it mostly describes his ability to withstand being shot at), Speed and Stamina (how long can he sprint). The game takes place in different locales - steel mill, prison, old cruise ship stranded on rocks, English manor, American slum, Russian underground bunker, supposedly Balkan war zone and Venice.

No relation to the Australian play, or the wrestling Power Stable.