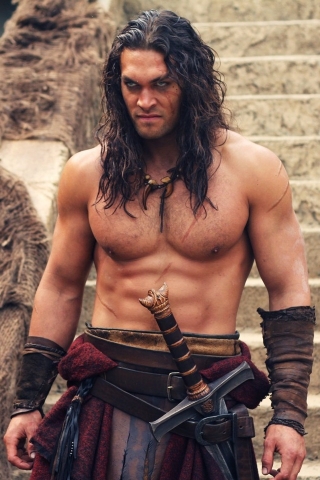 Shampoo didn't quite make the "Best things in life" list.
"Do you see how long his hair is? When Dothraki are defeated in combat, they cut off their braid so the whole world can see their shame. Khal Drogo has never been defeated... He's a savage, of course, but he's one of the finest killers alive."
— Viserys Targaryen, Game of Thrones
Advertisement:

Hair. Long, wild hair without a moment's consideration in keeping it presentable. If you see someone with this hair then they're almost surely a badass. And not just any badass, either. A character with Barbarian Longhair will be tough, wild, and as uncontrolled as their hair. Generally, it's a sort of shorthand for someone who can't be bothered to take care of their appearance because they're too busy kicking ass. They may still have a permashave regarding the rest of their body hair, although Beard of Barbarism and/or Carpet of Virility are also possible.

While this look obviously suits a character like a barbarian or certain types of soldiers, it is not limited to groups like these. In fact, because this image suited them so well, it was also a popular style for antiheroes and especially common during the '90s comic book fad of extreme antiheroes. Just one more reason not to mess with Barbarian Longhair.

Realistically, long hair is inconvenient for people who regularly find themselves in any kind of combat situation, because it gives your opponent something to grab at. Trust us, hair-grabs are painful, frightening, and incapacitating — even if the person doesn't rip a bit of your scalp out. That may, in fact, be part of the trope's appeal; if someone has long hair and is still a powerful fighter, that's a sign that they must be seriously tough.

The Trope Codifier is not literature per se, but the cover art of pulp novels and magazines. Especially the stories of Edgar Rice Burroughs and Robert E. Howard.

Compare Braids of Barbarism, Dreadlock Warrior, and Wild Hair. Compare and contrast Samurai Ponytail, another haircut that implies a badass. Contrast Long-Haired Pretty Boy for when a Pretty Boy has long, neat hair, Long Hair Is Feminine for when very long hair indicates femininity and/or being of high class, and Real Men Have Short Hair.

This trope can also qualify as Mr. Fanservice, seeing as the guys who display it are basically hunks with long hair.