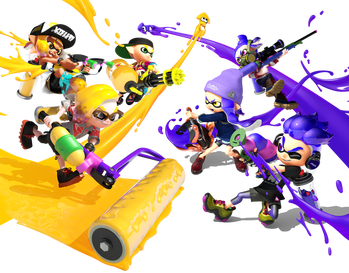 The art of war.
Advertisement:

The Art Attacker is a character who uses Art as a weapon. This could be paint, puppetry, music, video, etc.

Unlike a Starving Artist (who is dying for their art), an Art Attacker has someone else dying from their art. The attacker can be, but is not necessarily, a Mad Artist or a Cultured Badass. Their Weapon of Choice might be an Instrument of Murder, The Pen Is Mightier, a Weaponized Camera or something else. They may be able to create Anomalous Art. And if they run a Wax Museum Morgue, then their victims are very, very screwed.

Super-Trope to Comedy as a Weapon, Dance Battler, Marionette Master, Musical Assassin, and Paper Master. Those examples should be listed on their own pages. Sub-Trope of Improbable Weapon User. Compare Art Initiates Life, Brown Note, Imagination-Based Superpower and Rewriting Reality.

This trope has nothing to do with the TV series, Art Attack. Or someone literally or metaphorically attacking a piece of art.

The Splat Roller is a giant weaponized paint roller, perfect for both painting your turf and mowing down enemies.

The Splat Roller is a giant weaponized paint roller, perfect for both painting your turf and mowing down enemies.