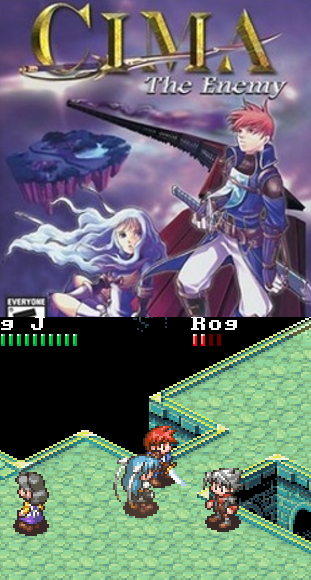 CIMA: The Enemy (known as Frontier Stories in Japan) is a 2003 isometric Action RPG for the Game Boy Advance made by Neverland, the company behind Lufia and Rune Factory.
Advertisement:

The story takes place in a sci-fi/fantasy western setting, with humanity under attack by a race of shapeshifting interdimensional aliens called CIMA , who attack humans by pulling them through portals into their world and feeding on their hope. There also exists an organization called the Gate Guardians who oppose the CIMA for humanity's sake, mostly acting as glorified bodyguards for travelers. When a train carrying settlers, along with three Gate Guardians: Jester, one of the six most elite Gate Guardians, and two rookies, Ark and Ivy, are pulled through a CIMA gate, and while scouting for a way out, the group is attacked by Pike Nighttrap, one of the Crimson Nine - the leaders of the CIMA. The settlers are scattered all over the CIMA world when the dungeon they're in collapses, while Jester is quickly killed fending Pike off while Ark and Ivy escape, leaving them to spearhead the rescue effort and clear a path for the train to make it's getaway back to the real world.

Along with the typical Action RPG elements, CIMA also incorporates some strategy elements as well. Since Ark and Ivy can't leave the rescued settlers on the train for risk of being attacked again, they end up tagging along with them and have to be protected. Fortunately, only a small handful of settlers take the role of The Load, while most of them have skills that can be utilized in dungeons, whether it's being able to fend off enemies, heal, or pass certain obstacles (for example, one of the pioneers is a small boy who can cross bridges that would crumble under the weight of a full-grown adult.)