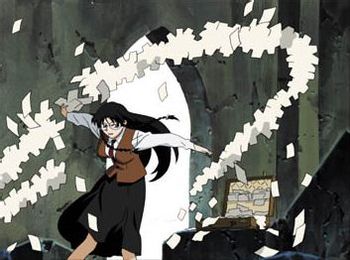 You're about to get reamed.
"My paper soldiers form a wall, five paces thick and twice as tall."
— Ciocie Cioelle, Kill Six Billion Demons
Advertisement:

Paper doesn't seem like it would make too great a weapon. Yeah, a paper cut might sting for a while, and a rolled-up newspaper could possibly slay seven flies with one blow, and it could certainly cover a rock, but nobody kids themselves that a sheet of paper is going to be useful in a real fight. Even the dreaded Paper Fan of Doom has much more bang than bite.

Sounds like a pretty lame power, right? Not quite.

There are actually a fair number of characters in fiction that use paper in battle very effectively. These characters have near-Elemental Powers to control or even transform into paper, and usually can create a vast number of weapons only limited by their imagination and paper folding skills. Often when this happens, the paper itself seems to take on the qualities of said weapon (i.e. a paper spear piercing someone like a spear made of steel, instead of crumpling up). These characters are often weak to water and fire (or anything that will soak or burn their paper), but not always, especially when the writer wants to show just how powerful they are. A piece of paper in the hands of a paper master can block bullets fired almost point blank without a scratch, a dome made out of their paper can protect one from a falling jet aircraft, and a paper card thrown by one often spells death.

Can be a subset of Green Thumb (as paper is mainly made from wood), although more often than not, this power stands by its own.

Be very careful, dear reader, when confronting these characters in offices, libraries, bookstores, newspaper stands, banknote mints, or paper mills. And heavens help you if one such opponent is also a Badass Bureaucrat.

Popular in anime as origami (the art of paper folding) is a big tradition in Japan. In a sense, this trope is Older Than Steam at the least: according to legend, a true master of origami can unlock the secrets of creation.

Also, in the Chinese and Japanese culture, paper talismans with supernatural powers are common. In Onmyōdō, an Onmyōji uses Shikigami, which are often depicted as little paper men/creatures following orders of the Onmyōji. Also "gami" can mean god 「神」, but is a homophone of paper 「紙」.

Compare Feather Flechettes and Paper People. Not to be confused with Paper Cutting or Black Belt in Origami.