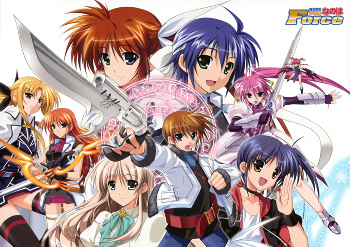 Magical Record Lyrical Nanoha Force is a manga, part of the Nanoha franchise. It's set six years after StrikerS and is considered the fourth season, even though ViVid chronologically predates it by two years In-Universe and a few months in Real Life. It ran in Nyantype, Newtype's Spin-Off magazine.

The plot revolved around a new Lost Logia called the forbidden Bible of the Silver Cross, which is somehow linked to a mysterious affliction known as the Eclipse Virus. When a young traveler called Thoma rescues a girl called Lily from a series of cruel experiments involving the Forbidden Book, he too becomes infected with the Eclipse Virus. This grants him superhuman strength, incredible magical power, a potent Healing Factor and near-perfect Anti-Magic abilities, but also an uncontrollable thirst for murder.

Meanwhile, Section Six of the TSAB mobilise to confront a new group of villains wrecking havoc across the non-administered worlds: the Hückebein Family, whose members all carry the Eclipse Virus. Finding that conventional magical weaponry is useless against the Anti-Magic of the Eclipse Virus, the TSAB attempt to bring Thoma into their fold while the Hückebein try to do the same.

Notice how the "Magical Girl" was dropped from the title. Indeed this installment departed from the signature Nanoha style, going further into Darker and Edgier territory than ever before, in rather sharp contrast to the concurrently running ViVid manga. Fandom reactions have been sharply divided.

Nyantype also ran a companion feature called Magical Record Lyrical Nanoha Force NEXT, which was a sneak peek with illustrations and detailed descriptions of new weapons and equipment that would be appearing in the upcoming chapter.

For various reasons, Force was put onto a prolonged hiatus in September 2013, and is more than likely Quietly Cancelled.