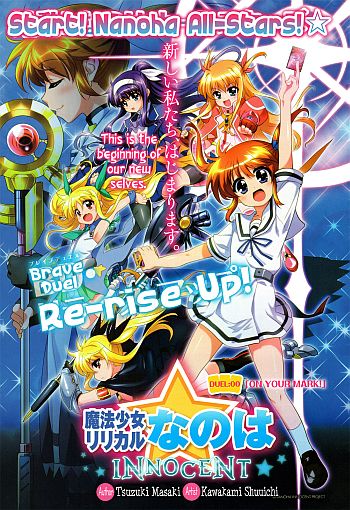 One of the fun things about the Lyrical Nanoha franchise is how the flexible Science Fantasy Multiverse setting allows it to dabble in practically any genre. Still, some genres simply won't fit in Nanoha. Take the Gaming series genre. It's rather hard to go all Serious Business over a children's card game when your average grade schooler could already throw around energy blasts.

Nanoha INNOCENT is a multimedia Spin-Off of the Nanoha series, composed of a web-based Card Battle Game and a manga published in CompAce that provides background info on the game. Unlike the other Nanoha installments, INNOCENT is set in an Alternate Universe with neither magic nor alternate dimensions. All the characters are either ordinary humans on earth, or ordinary pets in the case of the familiars.

The story revolves around Brave Duel, a recently created card-based virtual simulation game jointly released by Hobby Shop T&H, House Yagami, and the Granz Research Center. Instead of magic battles, the characters duel with each other through the card game, hoping to win for the sake of their team.