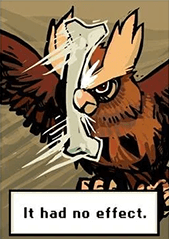 Stones and words may break my birds, but bones can never hurt them.
"I just hit her with the biggest lightning blast in the history of lightning. It did nothing!"
— Thor (about Hela), Thor: Ragnarok
Advertisement:

For whatever reason, some characters can ignore another character's powers, be it offensive or defensive.

They might be immune to every kind of magic, or their abilities are "too powerful" to be resisted but whatever the case, other characters' powers don't work on them and their own powers are not impeded in the least. If heroes attempt to use The Worf Barrage, they'll step out of the Smoke Shield and casually dust themselves off. When the Barrier Warrior tries to block their attacks with a Beehive Barrier, they'll break it into hexagons and knock them out. It can also take the form of a wrestler using their ultimate move and eliciting little more than a raised eyebrow from their opponent.

They aren't canceling their opponent's powers (not actively, at leastnote The more passive/effortless it is, the better it would look), and they often aren't explicitly stated to be immune or resistant beforehand. They're just that good. It's almost as if it were a make believe children's game where one of the kids refuses to "play by the rules" and insists they're invincible and immune to their playmate's imaginary powers. That's impossible... Right?

Depending on execution, this can be a terrifying reminder of exactly why they're called the BIG Bad, or a very groanworthy way of adding Fake Difficulty for a hero. If a villain has benefited from No Sell for the first four acts, by the time the hero masters his powers/confidence in the fifth, it's likely that he'll be the one using No Sell along with a Super Mode or Heroic Resolve.

The trope's name is a term used in Professional Wrestling circles. In all types of acting, "selling" means an actor reacts as if he had been hit hard when the attack didn't make contact or was harmlessly light. Professional wrestling refers to it as a "no-sell" when the wrestler that was struck doesn't react to the hit (i.e. he just stands there, as if his opponent were punching a brick wall). Originally, this was usually a case of the wrestler taking the hit just being a dick, and was highly frowned upon because it was seen as undermining Kayfabe. But it also came to be used as a way to demonstrate that a wrestler is just that tough. Some wrestlers use no-selling as their main schtick.

Immunities to specific attacks and/or Status Effects are almost always present in Tabletop Games and are the main purpose of Damage Typing. As a game model grows, it's more and more likely to get into Lensman Arms Race of effects, immunities and immunity-breaching effects. See also The Law of Diminishing Defensive Effort.

A favorite of the Implacable Man and The Juggernaut. The inversion is No Saving Throw.

"You Have No Power Here"

After the Infinity Gauntlet fails to kill him, Darkseid lulls Thanos to Fourth World, nullifying the Gauntlet and then sending him to the Omega Sanction without a sweat.

Alternative Title(s): Power Denial, Doesnt Work On Me, No Sale, Your Power Wont Work On Me

"You Have No Power Here"

After the Infinity Gauntlet fails to kill him, Darkseid lulls Thanos to Fourth World, nullifying the Gauntlet and then sending him to the Omega Sanction without a sweat.