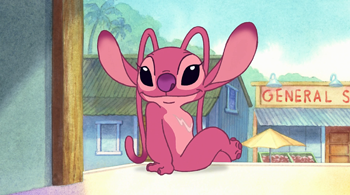 You look like an Angel...
"Angel" is the thirtieth episodenote twenty-fifth in production order of Lilo & Stitch: The Series. It first aired on January 5, 2004.

Lilo and Stitch are wandering around Kokaua Town looking for stuff to add to Lilo's "slug circus" when they suddenly see Gantu supposedly looking for an experiment. As Stitch takes care of Gantu, Lilo suddenly bumps into a pink female experiment that looks a lot like Stitch. The experiment growls at Lilo and flees, and Stitch spots the experiment from a distance afterwards. After he chases the experiment into an alleyway, she charms him and licks his face, making him instantly lovestruck with her. Despite Lilo being very suspicious of this experiment, Stitch convinces Lilo to take the experiment home with them.

As Stitch spends some time with the experiment, numbered 624 and sarcastically named by Lilo as "Angel", Lilo tries to ask Jumba about what the experiment's function is. However, when Stitch and Angel come into Jumba's bedroom, she sings into Jumba's ear, causing him to become evil again and lie about her functions. Once Lilo and Stitch leave, Jumba lets Angel access his experiment database.

Overnight, Angel wakes up from her laundry basket bed in the Pelekai residence (Lilo wouldn't let her sleep with Stitch) and sneaks over to Gantu's ship, revealing to the viewers that she was working for him and Hämsterviel. Gantu sent her to seduce Stitch and infiltrate the Pelekai household. 625 also tries to woo her, but she is completely uninterested in him.

The next morning, with Angel back in the basket, Stitch wakes her up carrying a bouquet of flowers. Although flattered, she tries to revert him to evil. To her surprise, however, her song has absolutely no effect on him, although he does compliment her "nice pipes". She then leaves the house with regret for him and goes out to revert several rehabilitated experiments back to evil. As she converts them, Stitch tries to win her back by doing several nice gestures for her, but none of them seem to work. At night, Angel has Stitch follow her up Mount Waialeale, luring him into a trap.

During this time, Lilo eventually finds out about Angel and her true motives. Thanks to Pleakley having followed Stitch and Angel throughout the day, recording their love story with a powerful handheld digital camera, Lilo realizes that Angel was working for Hämsterviel through a Ridiculously Long Phone Number on a dog tag the experiment was wearing. Likewise, Jumba tells Lilo about Angel's function. Lilo takes his computer and plays a recording of her song in reverse to revert him to his previous Affably Evil self.

Lilo, Jumba, and Pleakley then head to the summit of Waialeale, but by then they were too late as a spaceship hidden underneath the mountain blasts off. Inside the ship, Angel reveals her true motives to Stitch and traps him inside. Gantu then sics the captured experiments that she made evil again on Stitch. Stitch tries to destroy the ship's navigation systems, but the systems are protected by a force field. He gets shocked and weakened by the force field, leaving him at the mercy of his cousins. Feeling immense guilt for betraying the first person who ever treated her with genuine kindness, Angel sings her song backwards, restoring the experiments back to good before they could knock Stitch out. The experiments then turn on Gantu and destroy the navigation systems, bringing the ship crashing back down to Earth.

After the experiments leave the ship, Lilo realizes that Angel saved Stitch's life and finally accepts the experiment into the 'ohana. Unfortunately though, Gantu, angered by Angel's betrayal, blasts Stitch into a net and captures her in a capsule, running off with her before Stitch could free himself. Stitch is saddened by losing Angel, but Lilo promises him that they will rescue her someday, which they will eventually do so in late Season 2.