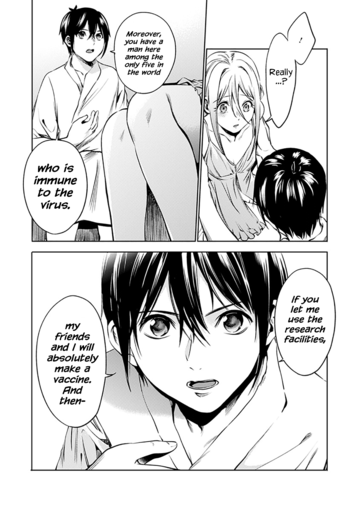 In a setting where humanity is being wiped out by The Plague, there will sometimes be one person who is mysteriously immune to the disease. This could be due to some inborn genetic resistance to the disease, or it could be that they are unknowingly exposing themselves to the cure in the course of their daily life (particularly if the disease has an Improbable Antidote). On occasion, especially in works that are short or Cut Short, there is no explanation.

Discovering this immune character is often the key to finding a cure to the disease, with the main difficulties being getting them safely to the scientists who can develop a cure and figuring out what factor in their environment protected them. Another possibility is that developing the cure might require extreme measures, leading to dramatic ethical dilemmas and making the immune character unwilling to cooperate.

The heroes will want to protect and study this character to find a cure and save mankind. A Corrupt Corporate Executive may want to kidnap them in order to monopolize the cure, and if The Government is involved in the development of the cure, they will always seem almost creepily enthusiastic in going out of their way to find methods that will not only be highly lethal but also unnecessarily painful. If the disease was deliberately engineered by a villain, then they may want to hunt down and kill the Immune to prevent a cure from being developed.

In darker works, this character's immunity might not be able to be turned into a cure for others, in which case they can become The Aloner in an empty world After the End. In really dark works, someone who had been the Immune ceases to be. Perhaps they were protected by environmental factors that were undermined before they were recognized.

If this character isn't affected by The Virus but is still perfectly capable of spreading it to others, they may also play the role of Typhoid Mary or Poisonous Person. If the character was not human to begin with, Hybrid Overkill Avoidance may protect them from becoming a Hybrid Monster.

Compare Ideal Illness Immunity, a character or species that isn't just resistant to this one disease, but cannot get sick, ever.