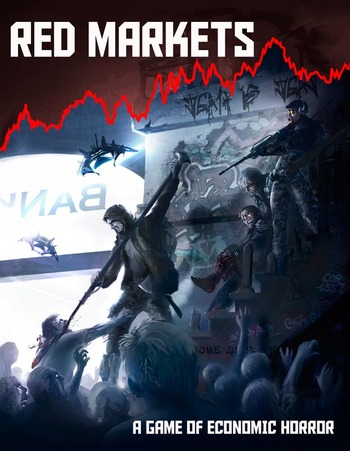 Red Markets is a roleplaying game of economic horror set in the post-zombie apocalypse United States. It is the premier release by Hebanon Games and Caleb Stokes.

The Blight caught people off guard when it emerged, not because they hadn't been prepared for it by decades of B-movies, but because they dismissed it as click-baity fake news. As a result, the Federal government, still reeling from the economic troubles of the early 21st century, gave up on salvaging the western states of the USA and just cut them off.

Eventually, some of the survivors in the West, or "The Loss" as it's commonly referred to now, coalesced into Enclaves fortified against the hordes of walking Casualties. These Enclaves survive by scavenging the carcass of the United States and trading their findings over the Ubiq, a network sustained by a series of balloon relays in the stratosphere. This is where the players come in, they are Takers, scavengers for hire taking jobs to recover specific goods, scout out reclamation sites for the Department of Homeland Quarantine and Stewardship, raid DHQS black sites, or just kill Casualties for the bounty on their ID cards.

Just because the world ended doesn't mean there aren't bills to pay.