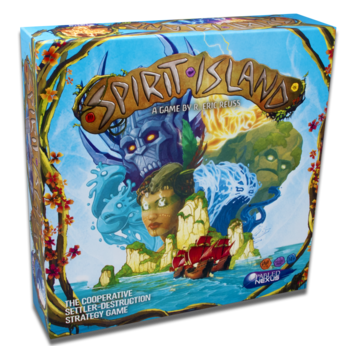 Designed by R. Eric Reuss and published by Greater Than Games, Spirit Island could be summed up as "What if the Settlers got to Catan, and Catan decided to fight back?"

Spirit Island is a cooperative strategy game where one to four players take the role of magical spirits on the only island where such spirits exist anymore. Unfortunately, one colonial empire or another shows up, decides there's plenty of room to settle and plenty of resources to pillage, and starts tearing up the island. With most spirits not very used to mortal timeframes, it's taken them a bit to wake up and start doing something about it. The island is already in peril of permanent damage, and the spirits need to gain enough momentum to drive the invaders off before their magic fades for good.

Players start with a small amount of presence on the board and their own hand of cards. Each round, players pick an option to grow their spirit, and use their initially limited energy and actions to play power cards that will impact the board. Power cards all have their own speed (immediate or delayed), range, effects, and limitations. The invaders will then follow their own deck of cards to scout more of the island, build more settlements, and damage the island. Too much damage will create blight, which destroys spirit presence, and too much blight ends the game. Island natives will strike back if hurt, but are too passive and few to handle the problem on their own. As the invaders start losing towns, their fear of the unnatural island will rise, making it easier to hit a final breaking point where they all cut their losses and run. Both sides will escalate - the spirits by growing into their full power, the invaders by throwing more and more settlers at you.

Each of the playable spirits are individual characters in their own right. Every spirit has their own set of starting power cards, unique rules, options for growing and gaining power, and unlockable innate powers. Invaders can come from different nations presenting different challenges, special scenario cards can change the dynamics, and finally there's a sliding difficulty scale tailored to each nation. The base game has a lot of content options and replayability, even before getting into expansions.

The game was introduced with a successful Kickstarter campaign in 2015, and reached players in 2017. A mini-expansion, Branch and Claw, was also funded as a stretch goal from the original campaign, adding 2 more spirits, a new invader, new tokens that add effects to lands, and an event deck to introduce randomness. A second Kickstarter campaign was launched in 2018, for a full expansion titled Jagged Earth, which was fully funded and blew past all its stretch goals before the day ended. Released in 2020, Jagged Earth added ten new spirits, more pieces for 5th or 6th players, 2 new adversaries, aspects that modify base game spirits, more scenarios, powers, events, fear effects, blight effects, and rules for varied island layouts. Finally, each Kickstarter has also included a promo pack with more spirits and content for backers, which is also available to buy separately for new fans. As of 2020, the game has 24 playable spirits.