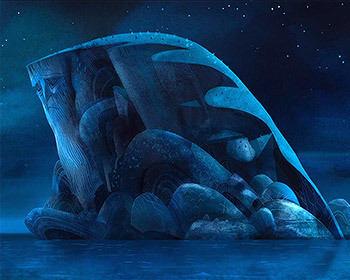 When a rocky topographic feature — a mountain, hill, giant boulder, or even an outcrop at sea — plays an important role in a work of fiction, writers are prone to making its appearance unique and memorable. As few writers or viewers are geologists, saying it's made of such-and-such a type of stone can contribute little to the work, either descriptively or dramatically. Making it look like a creature, however, is sure to strike a chord with the audience.

Both variants are often combined with Cave Mouth. Mountaineers may find themselves engaged in a Colossus Climb. For its squickier sister trope, see Giant Corpse World, a landscape made of a decaying corpse.

Contrast That's No Moon!, in which a geographic feature may seem nondescript at first, but later reveal itself to be something else as a surprise. May overlap with It Kind of Looks Like a Face.