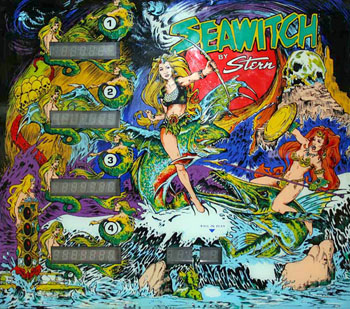 Seawitch is an arcade pinball game designed by Mike Kubin and illustrated by Bob Timm. It was released in May 1980 by Stern Electronics.

Before an ominous storm-tossed shoreline, two Seawitches engage in a no-holds-barred battle for supremacy while a school of mermaids watch from the sidelines. Launch the ball to loop around the upper playfield and down to the flippers, then sweep the three banks of drop targets to advance the bonus and increase the multiplier. Against the sounds of crashing waves, raise the value of the spinner, then use the two upper flippers to fling the ball around the Rip Tide and quickly build up your score.

Although it doesn't feature any innovative twists, Seawitch is regarded as a classic pin from Stern Electronics, with a wide variety of shots and surprisingly fast action wrapped up in a gorgeous aquatic art package. This was the first game programmed by longtime arcade programmer Bill "Pfutz" Pfutzenreuter, and was the first standard-body pinball from Stern to offer seven-digit scoring.