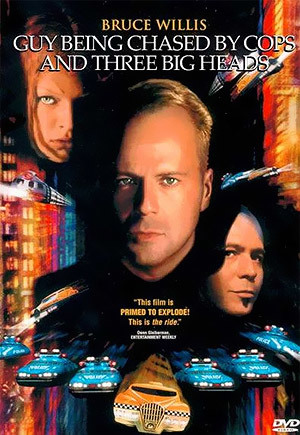 "They could whip up some bad Photoshop poster in an afternoon. They do it all the time. Two big heads."
— David Drayton, The Mist
Advertisement:

A term referring to the tendency for Film Posters and DVD cover art to have a black background with the faces of the lead actors above the name of the movie. A simple one or two heads staring at you with the setting superimposed in the background with set-piece specific art in the foreground. It could also be the entire cast in various stages of intensity... and nothing else. When done with the villain, it is Evil Overlooker. Often overlaps with Sean Connery Is About to Shoot You.

The style became ubiquitous once the age of photo editing software came about, since it meant studios no longer had to commission an artist tens of thousands of dollars to paint a carefully crafted poster for them, when they could just take stock photos of the lead actor and have interns superimpose them onto any background. The same basic principle can exist with more than just a floating head, as full body group pictures splashed across the poster in different sizes and scaling creates a similar style, while maybe more crowded with more to look at it can still evoke a sense of having a generic template.

In many cases, the main film poster may be more creative because of the larger size it will be displayed at, but the VHD/DVD/Blu-Ray will have a more generic "main actor heads against a black background" design so that a potential consumer can see who is in the movie at a glance.

Not to be confused with Flying Face, when heads literally float as a magical side effect of Losing Your Head, or metaphorically as a Floating Advice Reminder, or Huge Holographic Head, or Sky Face. Or, for that matter, exploding head syndrome.