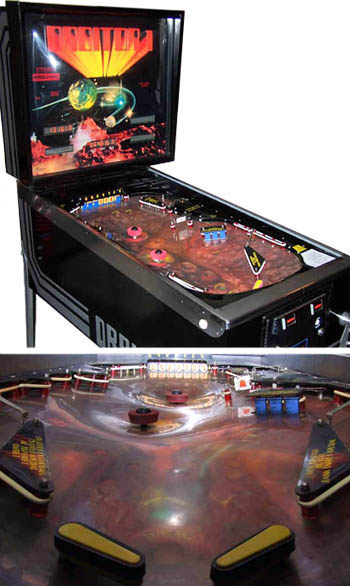 Top: The Orbitor 1 table.
Bottom: A close-up of the playfield.
Advertisement:

Orbitor 1 is a widebody Physical Pinball Table released by Stern Electronics in 1982. It was the last table made by Stern before their pinball division declared bankruptcy and closed its doors.

The game was originally conceived by Dixie Rinehart and Al Gross of Aspen, Colorado; their company, New Product Development People (NPDP), had invented various devices for NASA, such as zero-gravity toilets and agile astronaut gloves. After seeing a museum exhibit on gravity that featured marbles rolling around a bowled surface, they realized it could be turned into a game. When a pitch to Disney failed to yield fruit, NPDP contacted Stern Electronics, who agreed to develop it as the world's first "3-D pinball".

Instead of a regular pinball's flat surface, the Orbitor 1 playfield consists of two parts: the bottom was molded plastic that was painted to resemble a lunar surface, while above it was a transparent warped plexi-bowl layer where the ball moves. Two spinning bumpers sat in the middle and a set of dropdown targets sat on the sides; in a moderately-lit room, the upper playfield was almost complete invisible, resulting in games that had pinballs swooping around the bumpers over a moon. The curved table even extended behind the flippers, and skilled players could make potential drains spin back onto the playfield. Even the backbox got into the act, with a molded planet and moon protruding from the art.

Orbitor 1 received a lot of attention from distributors when the game was first shown, and Stern reportedly received orders for several thousand games. Unfortunately, it was not enough to save the pinball division, and only 800 tables were made before the company exited the industry. Adding insult to injury, Orbitor 1 has not been vindicated over time; while it's a radical novelty at first, the sparse layout, simple rules, and sheer difficulty of aiming shots on an uneven surface quickly turns off most players. It gets the best reception in larger collections as a change of pace from mainstream pinball games.