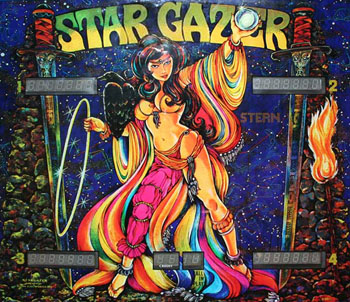 After a night of astrology, she likes to unwind by doing the hula.
Advertisement:

Star Gazer is a 1980 pinball table designed by Brian Poklacki and released by Stern Electronics. The gazer in question is a Hot Gypsy Woman who uses her powers of prognostication to guide players to a high score. Hit the lower drop target banks to raise the bonus multiplier, then collect the twelve signs of the Zodiac to advance the Star Bonus and get a chance at the Extra Ball. Collect the various Stars on the playfield to lock the Spinner values, but beware of the semicircle scoops feeding each flipper, as they are capricious and unpredictable.

Star Gazer is considered a classic solid-state game from Stern, with extremely fast action and a challenging set of shots wrapped in a lovely and timeless package. Fewer than 900 tables were made, making this a hard game to find anywhere.

Trivia buffs will note that this is the pinball that appeared in the boys' firehouse loft in the original Ghostbusters.