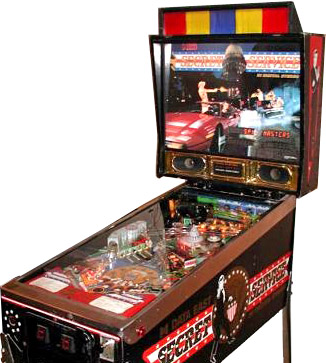 In Digital Stereo!
"Licensed to Thrill"
— Advertising flyer* Where did we hear that before?
Advertisement:

Secret Service is a 1988 Physical Pinball Table from Data East. It was designed by Joe Kaminkow, with art by Kevin O'Connor and Margaret Hudson.

The player is Agent 001 of the United States Secret Service, with one simple mission — protect Washington, D.C. from the evil Soviets who are targeting the nation's leaders. Patrol the streets of D.C. in your service-issued Ferrari, gun down enemy agents in front of the Capitol Building, then curve around the Beltway and lock your ball in the White House. Infiltrate the Soviet spy headquarters via the underground passage, then start a three-ball multiball for a chance at the Special.

Secret Service is memorable for its post-game karaoke mode; after each game, the table would play the chorus from "Nobody Does It Better" (from The Spy Who Loved Me), while displaying the lyrics on the alphanumeric score display. It also featured a Digital Stereo soundsystem, a point played up in advertisements.

This was the second pinball game released by Data East;note Laser War was the first most players deem it as a respectable effort, though cynics will say that's because it liberally borrows playfield elements from High Speed and Flash. In any event, it's regarded as a decent game, a not-too-Guilty Pleasure that plays around with the spy genre.