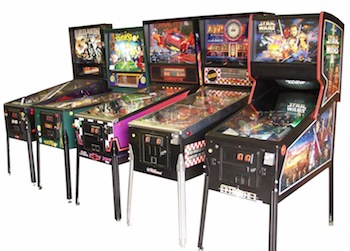 On this wiki, "Physical Pinball Table" refers to a Pinball game that originally existed as a tangible machine in its history. Many of these pinball tables may be emulated or adapted for Video Game Systems or home computers, but their origins are in cabinets that can be touched, nudged, slapped, and jostled.

Despite popular misconception, the rise of Video Games has not stopped pinball machines from being made. Stern Pinball continues to release a half-dozen new titles every year in several different editions, with a majority of them going to private owners over commercial establishments. New companies like Jersey Jack Pinball, American Pinball, and Multimorphic are releasing new tables with original ideas for gameplay, modularity, and maintainability. Meanwhile, individuals like John Popadiuk and Ben Heck continue to make original machines with very limited production runs for truly devoted players, while companies like VirtuaPin

sell cabinets, hardware, and control boards to let hobbyists build their own tables.

Video Game adaptations of pinball tables have existed since the beginning of video gaming, but those early ports tended to be overly simplistic due to technical limitations. With advances in computing power, however, digital simulations have become accurate enough to re-introduce physical tables to new generations of players, giving pinball fans more ways to easily enjoy their favorite tables. The companies and titles in this realm include:

Physical pinball tables with their own pages:

Other notable physical pinball tables include: