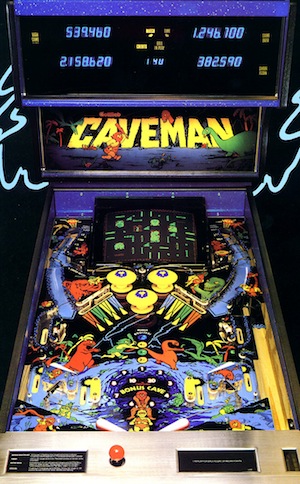 It Will AMAZE You!
Advertisement:

Caveman is a pinball machine released in September 1982 by Gottlieb. Designed by John Buras, it is notable for being the first Pinball/Video Game hybrid, and the Ur-Example of the Video Mode.

Physically, Caveman resembles a conventional pinball machine, but with a video screen embedded in the top of the playfield and a small joystick in front of the player's position. During gameplay, shooting a ball into either side of the screen would start a simple Maze Game, whereupon the player can move the caveman, catching extra balls and hunting dinosaurs. The player could return to the pinball game if he exited the maze, but getting eaten by a T. rex would drain the ball.