All Cavemen Were Neanderthals 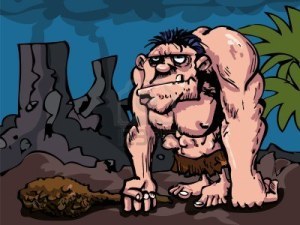 Whenever a cave man is depicted in media, he will often be The Big Guy, having more muscles and stature than his descendants. This is especially true if he's a regular character who has somehow been de-evolved, but usually it's a defrosted Human Popsicle scenario. They're typically rather unintelligent or at least simple-minded, and highly unsophisticated on a technical level — most will be (sometimes literally) knuckle-walking brutes who speak in a vocabulary-deprived Hulk Speak, clad in primitive animal pelts and fighting with simple Primitive Clubs. The may have just mastered a haphazard control over fire, and the brighter specimens may be all abuzz about new and experimental technologies such as the wheel.

Cave women, in the rare cases where they appear, are usually matronly and physically stronger than their modern counterparts, sometimes up to a Brawn Hilda-type, unless they're just here for Fanservice in which case they're Nubile Savages.

This is usually a case of poor research; the author is basing the caveman, rather than on Cro-Magnon humans, on the Neanderthals who were stockier and likely stronger, but still shorter than Cro-Magnon man. It's almost as if in fiction humanity evolved from the Frazetta Man. The trope was invented by the fact that one of the first prehistoric skeletons was of a heavily arthritic old man with osteoporosis. Scientists mistakenly assumed he was the norm and not an outlier.

This may even extend to showing these super-ape-men as having Super Strength, being incredibly athletic and acrobatic, and generally being savage fighters; which isn't quite so preposterous for a number of reasons.

Just for the record, compared to modern man (Homo sapiens sapiens), the Neanderthal man was either a separate species (Homo neanderthalensis) or a subspecies (Homo sapiens neanderthalensis), probably depending on who you ask. They evolved in Eurasia while we evolved in Africa. They were not our ancestors, except perhaps in a small way — there is the hypothesis, now backed by evidence from the Neanderthal Genome Project, that small-scale interbreeding occurred between Neanderthals and H. sapiens in the Middle East 80,000 to 50,000 years ago. Most Caucasians and Asians seem to have a bit of Neanderthal DNA, while people of entirely African descent have none because there were never Neanderthals in Africa. Since the Neanderthals were hardier than Cro-Magnons, there is evidence that they were better at handling certain common illnesses endemic to temperate and colder climates, and interbreeding transferred genes that are of direct benefit to the functioning of our immune system.

There is a practical aspect to this trope. This is often simply a result of the fact the easiest way to depict a caveman on Live-Action TV is to add brow ridges, fake hair, animal skin clothing, etc., to an actor, so the resulting Rubber-Forehead Alien will be slightly larger than a human, and rather large actors are often cast in the part.

This is usually a double case of artistic liberties — most often, Neanderthal cavemen are depicted as nothing but simple, dumb brutes capable of barely a grunt. The various sciences researching them indicate that this is untrue, too — in fact, they had larger brains than humans.note  Although that extra brainpower was directed to different places than in a modern human; Neanderthals had a much larger occipital lobe, which processes visual information. This somewhat came at the expense of the frontal lobe (which in modern humans is disproportionately large), which governs higher functions. Neanderthals also lacked the ability to form complex societies (their groups were far smaller on average than a modern human tribe). It is also thought that Neanderthals had a longer gestation period and faster maturation rate, both of which hinder mental growth. They were creative enough to know how to make glue from pitch and to make clothing and art, and used a complex technique for making tools called Levallois and later Mosterian, which modern humans also used at the same time. Considering they had to endure Arctic-level conditions, they really weren't dumber than modern humans, just different.

Contrast: Nubile Savage, where prehistoric men will be hulking, ugly brutes, but prehistoric women are pinup models with bodies that exactly correspond to the current standards of beauty, and Handsome Heroic Caveman, where the man will be more attractive to go with a more modern sense of morality. For more bestial humanoids, check out Frazetta Man. Even earlier than these guys are Original Man.

Bob is a prehistoric raccoon. Instead of the sleek physiology that Sly and his other ancestors share, he is large, muscular and less handsome than them. No more hairy, though.

Bob is a prehistoric raccoon. Instead of the sleek physiology that Sly and his other ancestors share, he is large, muscular and less handsome than them. No more hairy, though.