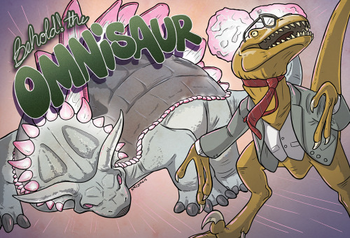 "No! It's... it's a Calvinosaurus! Named after the renowned archeologist who discovered it, the huge Calvinosaur can eat an ultrasaur in a single bite!"
— Calvin, Calvin and Hobbes
Advertisement:

Many works are set in 1 Million B.C. However, some works just do a few episodes in prehistory, while mostly in other eras. When this happens, they usually have a prehistoric animal be an ancestor of the characters in the show.

However, most writers only know a few types of dinosaur. When they don't think they can pass off any of them as the ancestor of their character, they tend to use either "Xsaurus", "Xdactyl", "X. rex", "Xraptor", "Xdon" or similar naming schemes to quickly create a new species of dinosaur, filling in the template with any word that seems relevant to the beast in question or just looks cool. "Saber-toothed X", "Woolly X", "Cave X", and "Dire X" are also used in a similar manner, usually by sticking the descriptors in front of any given species of modern mammal to create an ice age-themed version of its species. May also sometimes occur in modern-day set dramas involving mutated animals.

Funny Animal characters are usually neanderthals (or what fiction tends to think neanderthals were like) unless they are antagonists.

Note that this includes both portmanteaus or mix and match critters of a modern-day animal and a prehistoric animal. May intersect with Artistic License – Paleontology. Related to Dire Beast and T. Rexpy.