Literature / Man After Man: An Anthropology of the Future 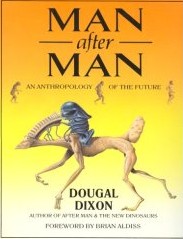 Man After Man: An Anthropology of the Future (1990) is the third speculative evolution book written by Scottish geologist Dougal Dixon, and the most controversial installment of the trio. Allegedly a science-fiction account of future human evolution, the premise and its accompanying illustrations can come off as disturbing. Unlike Dixon's previous two outings, this book deliberately ignores the laws of evolution, biology, and genetics when the plot calls for it; these contrivances are not helped by the unsettling pictures and imagery that accompany the posthumans of the distant future. Also unlike Dixon's previous two books, this one has a narrative component and focuses on individuals across time rather than entire species, even giving them individual names.

The main plot of the book starts 200 years from now (2190 AD), which for the book's scale is almost the present day. Humanity begins to play around with its own genetics, like a kid with LEGO blocks on a large scale, creating new humanoid creatures known as aquamorphs and aquatics (or basically Fish People), and vacuumorph beings that have been engineered for life in the vacuum of space. Their skin and eyes carry shields of skin to keep its body stable even without pressure as living space probes. All the while, however, the Earth's environment is getting increasingly polluted and climate change has caused major disruption to civilization, the few nation-states that are left are sending colonists into space to search for other habitable planets.

Unfortunately, a century later, environmental deterioration finally kills off most of the planet's fauna. Humanity is (inexplicably) one of the only species left standing and so a faction of the survivors (a cybernetically enhanced offshoot known as the Hitek) begin to create new Biotech Human species for the next 500 years en masse to fill in some of critical ecosystemic niches left by the general absence of the Earth's now countless extinct animal species. Meanwhile some of the remnants of unaltered humans decide to leave the wrecked earth and return when it gets well... better, while others, without the benefit of technology, return to barbarism and later start to build a form of civilization again.

Unfortunately that doesn't happen when the Earth's magnetic field flips. The Hitek (and also the remaining normal humans) went extinct themselves in 2990, allowing the altered humans to naturally evolve for a few million years (which is the main point of the book). Ironically, the descendants of humanity that went to the stars and now return have themselves been altered — and possibly evolved — so much they no longer recognize their ancestral planet, let alone the animals on its surface, and exploit both to the point of eradication.

Near the end of the book, most of the Earth's inhabitants either leave or die out, leaving only a species of deep-sea aquatics to eke out hand-to-mouth lives on the ocean floor, although someday (according to the book) they would eventually leave the water and become the new dominant species on the planet.

The majority of tropes below might lead you to think that this is some sort of horror novel or film. However, this is far from the case. In fact, it's only a flight of fancy created as a fictional textbook.

See also All Tomorrows for another story about the far future evolution of humanity, and Super-Conductive Brains Parataxis for another nightmarish tale of human genetic engineering.

Man After Man provides examples of the following tropes: