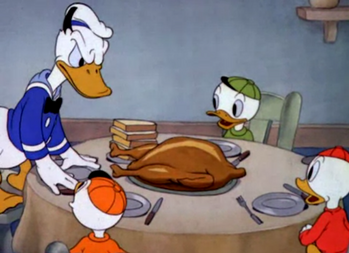 When the phrase "you are what you eat" is taken a little too literally.
"Let me get this straight. You know her; she knows you. But she wants to eat him. And... everybody's okay with this? DID I MISS SOMETHING?!"
— Timon, The Lion King
Advertisement:

There's an unspoken awkward issue in fiction involving Talking Animals. A lion is a carnivore - its teeth and intestinal tract are geared to eat meat. But what if the lion is as much of a person as Mr. Antelope? If everyone can talk, and everyone at least implicitly has the same thoughts and feelings as everyone else regardless of species, does this mean predatory creatures are forced to engage in a form of murder to eat? Or is it more like cannibalism? And then what happens when human characters are added into the mix? Let's not get started on Anthropomorphic Food...

Works of fiction will address this in one of several ways:

May or may not result in Sapient Eat Sapient, depending on how it is handled. See also Super-Persistent Predator, Let's Meet the Meat, Ascended to Carnivorism, and I Taste Delicious. Compare Furry Confusion, Cats Are Mean, Reptiles Are Abhorrent (notice that small lizards and turtles, two groups that include herbivores, get to be non-abhorrent far more frequently than snakes, which are all carnivores), and What Measure Is a Non-Cute?. As with What Measure is a Non Cute, do not expect to see realistic animal behavior taken into account. When it's between a Friendly Neighborhood Vampire and a human, it's Warm Bloodbags Are Everywhere. Things get really ugly when I'm a Humanitarian or To Serve Man gets thrown into the mix.

When an animal character is named after the food they provide, it's A Pig Named "Porkchop".