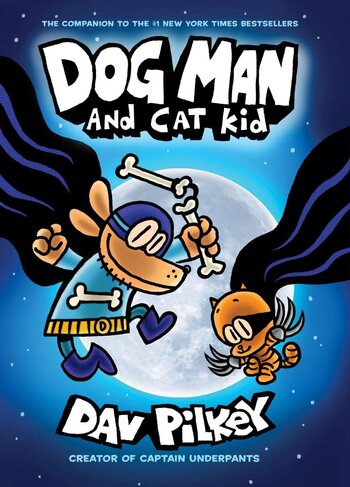 Not pictured: Mouse Boy.
In stories featuring cats and dogs in which neither cats nor dogs are villainous, cats often play second fiddle to the dogs in some way or another.
Advertisement:

For example, the dog characters may be more numerous or have a more major individual role in the story. Oftentimes, the cats may have a subservient role to the dogs, like a butler, a lower rank in a team, or a hero's sidekick. Sometimes, the cats have a role that is not subservient to the dogs, like partner, ally, or nonvillainous rival, but still play a more supporting role in the story.

This trope comes in many types:

Inversions of this trope do occur when wild felines and canines are used, with King of Beasts (either tigers or lions) being more central focus, while wild canines like wolves and foxes being treated in lesser roles, even if the wild canines do outnumber the leading wild felines.

Contrast Cats Are Superior and King of Beasts. Subtrope to Cat/Dog Dichotomy. Female Feline, Male Mutt is a related trope. See also A Cat in a Gang of Dogs.