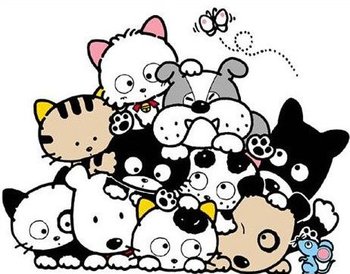 Created by consumer electronics giant Sony (of all institutions), Tama & Friends is a long running series of anime shorts, movies and occasional games.

Living on Third Street is Tama, an adorable kitty with a smiley face on his head and an incurable wanderlust. Often running off to explore the town, he's joined by his best friend, a timid but kind-hearted pooch named Pochi. He's also accompanied by the rest of his crew, idol of Third Street Momo, mischievous Tora, wayward stray Nora, young Koma, sleep prone Beh, athlete Kuro, and laid-back Gon. The group is sometimes joined, when not tormented, by the mean but secretly softhearted Bull.