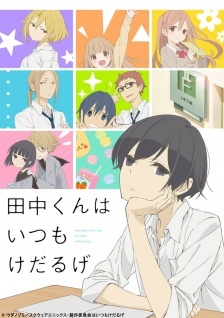 From top to bottom: Echizen, Miyano, Shiraishi, Ohta, Kato and Shimura, Rino and Saya, and the hero himself!
Tanaka-kun is always listless...
Advertisement:

A Slice of Life manga by Nozomi Uda, Tanaka-kun is Always Listless (Tanaka-kun wa Itsumo Kedaruge, 田中くんはいつもけだるげ) follows the life of an incredibly lethargic boy named Tanaka and his friend Ohta, a reliable straight-laced student who's made a habit of making sure Tanaka can get by living his day-to-day life despite his near-Zen levels of laziness and excessive sleepiness.

His almost too-peaceful life is disturbed, however, when people begin to barge into it bringing the ghastly concepts of involvement and excitement and somehow or another, friendship.

Was adapted to anime for the Spring 2016 season by studio SILVER LINK. It's available for streaming

on Crunchyroll and later a dub from Sentai Filmworks.

Has a character page in the works here.