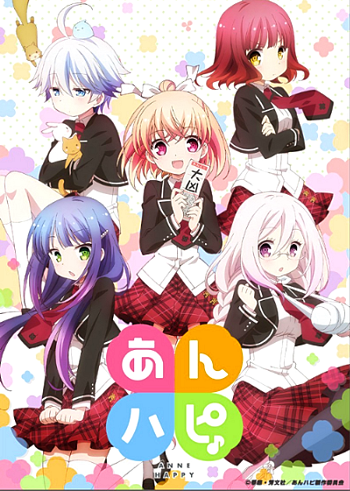 Anne Happy~♪ (あんハピ♪ /Anhapi♪) is a Slice of Life comedy series written and drawn by Cocoji, and serialized in Manga Time Kirara Forward since 2013. It is licensed for English-speaking audiences by Yen Press, and an animated adaptation by SILVER LINK. premiered during the Spring 2016 Anime season.

It's a new school year, and for Ruri Hibarigaoka it's also a new start of sorts, especially now that she's been enrolled in the prestigious Tennomifune Academy. However on the way to school, she encounters Anne Hanakoizumi, a girl her age from the same school... Who also happened to be hanging from her collar off the side of a bridge after she tried to rescue a puppy.

After helping Anne with her predicament, Ruri soon discovers that she's also in the same class at Tennomifune, class 7. Unlike the other classes however, which specialize in sports or the arts, class 7 specializes in one thing: the pursuit of happiness. This is because, for one reason or another, every member of the class is beset by some level of "misfortune", and it is the duty of the class as a whole to make sure that they find some way to be happy in their daily lives, in spite of these misfortunes.

Ruri, of course, thinks that this is all unfair, but then again she's not as "normal" as she thinks she is. Can she and her classmates overcome their misfortunes, and find real happiness?