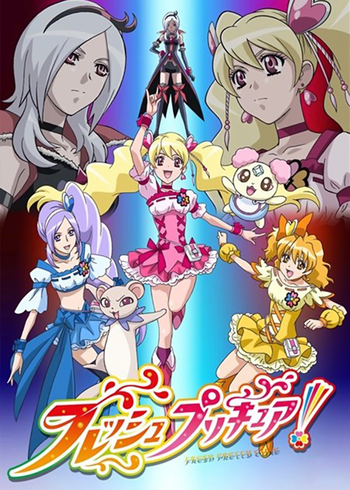 Fresh PreCure! is the sixth entry in the Pretty Cure franchise. The title comes from the heroines' fresh fruit Edible Theme Naming.

Love Momozono is a ridiculously-positive and empathetic girl who loves dancing. While attending a concert by her idols Trinity, she is caught in an attack by the evil forces of Labyrinth, who seek to conquer The Multiverse by finding a MacGuffin called "Infinity". Love's desire to protect her idols and the happiness of those around her transform her into Cure Peach, one of the Legendary Warriors known as Pretty Cure.

She soon forms a trio with her childhood friends: Miki Aono, an Insufferable Genius and fashion model who transforms into Cure Berry; and Inori Yamabuki, a kind-hearted animal lover who becomes Cure Pine. Together with Weasel Mascot Tart and baby puffball thing Chiffon, they must track down Infinity and protect the world from Labyrinth's machinations.

Fresh was an attempt to refresh (no pun intended) the Pretty Cure franchise after the successful but derivative Yes! Pretty Cure 5. It lowered the number of main characters to a manageable three, allowing for more development per character, and increased the amount of action and drama. The show later introduces a Story Arc focused on Labyrinth agent Eas, who attempts to infiltrate Love's group and steal her Transformation Trinket, only for the story to deconstruct Becoming the Mask in the most painful way possible, culminating in the birth of the fourth Pretty Cure, Cure Passion.

A novel sequel takes place a year after the events of the anime, where Love is having a hard time deciding a future of her own as high school entrance exams are drawing near. Clower Town is suddenly attacked by a mysterious black-caped man who uses a new type of monster called Fushiawase, resulting in the Cures, now joined by two former villains, stepping up again to fight the new threat.