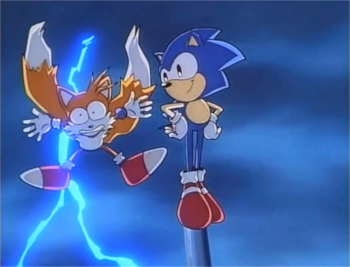 Tails' fear of lightning is well-justified... especially in high places like where Sonic is standing at.
Tidus: Are you that scared?
Rikku: Mm-hm. When I was little, a fiend attacked me while I was swimming at the beach. My brother tried to beat it back with a spell. (squeaks at another thunderclap) But he missed and hit me instead! It was a Thunder spell — "Bzzzzzzt!"
Tidus: Ouch!
Rikku: I've been scared of lightning ever since.
— Final Fantasy X
Advertisement:

Your otherwise capable or serious character has an inordinate fear of thunderstorms. This is a primal, almost childish fear that surprises other characters, although it's not always played for laughs. The actual name of this fear is "Brontophobia" or "Astraphobia". note  The former suggests a fear of late-Jurassic Apatosaurine dinosaurs while the latter, a horror of affordable German family cars. It also happens to animals, especially dogs.

This trope in Real Life is Older Than Feudalism, with the fear of thunder being a prime defining weakness of the Julius Caesar and the Julio-Claudian dynasty of Ancient Rome.

Note that fear of thunder is often treated as silly; after all, it's just a lot of noise. Fear of lightning, on the other hand, is absolutely justified

by Snopes — but by the same token, since you hear the thunder after the lightning, it's good news: it means you weren't hit. Nothing Is Scarier may also come into play, as Alfred Hitchcock once said: "There is no terror in the bang, only in the anticipation of it."

A subtrope of Why Did It Have to Be Snakes?, especially common in anime. Would be logical in settings with Dramatic Thunder, but the tropes seldom combine. May result in a Fright-Induced Bunkmate.