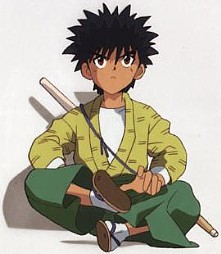 A youngster who may have all the skills and attitude to be a samurai, but has not yet actually faced true battle. Often the Kid Samurai has practiced an "art" form like kendo, instead of a battle form like kenjutsu, and has yet even to draw blood in a fight. Sometimes played as an arrogant buffoon, other times as a "little brother" sidekick. If he doesn't die a tragic death in one of his first true battles, the Kid Samurai may mature into the true Samurai.

His Weapon of Choice is likely to be a wooden training sword. Sometimes they'll be a Kendo Team Captain in their spare time.