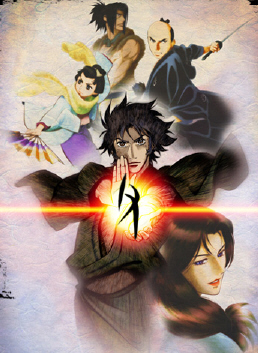 In the 14th year of the Tenpou era, ten years before Captain Perry's black ships, things are not going well in Japan. People are suffering from famine, poverty, diseases, and the strict rules of society made even worse by the spartan reforms issued by the government. The fear from the west is so great that studies of western culture and sciences are banned in the country, and trade with foreign countries and even foreigners stepping on Japanese soil is prohibited under penalty of death. And if all this wasn't enough, there are huge, destructive monsters on the loose. These bizarre creatures, called youi appear from some strange but enchanting place usually referred to as ikai, a different world, and seem to have something to do with people's strong desires. Nevertheless, they need to be stopped, and this is where our heroes step in.

The main hero is Ryuudou Yukiatsu a 39-year-old drifter. He was born as the heir of a shogunate vassal, but he was taken away by the "other world" as a child, and though he came back, he could never find peace in this world again. He ran away from home and spent his life as a vagrant, committing various crimes, even murder. However, the "other world" gave him an intriguing power: he can draw the original meaning out of names of things, and use it as he wishes to. Due to this power (at least it seems so) he is enlisted to an underground organization called Bansha Aratamesho, a ragtag group of people called "ayashi" whose purpose is finding and defeating youi. Here, he needs to work together with his cranky boss Ogasawara Houzaburou (western scholar and nineteen years his junior), and his partners Edo Genbatsu (Shinto priest), Saizou (former actress) and Abi (former mountain tribesman) - each of them hiding a thing or two in their closets.

But little does the Bansha Aratamesho know that while their youi-slaying abilities are appreciated, they're just pawns in the hands of their politician patrons whose aim is to remove their opponents from power. In addition, there's a similar group led by Torii Youzou that seems to have their own agenda with youi and would much like to keep the ayashi out of it - although Torii seems to be very interested in Yukiatsu for reasons other than his strange power. And let's not forget the weird masked people lurking in the background...