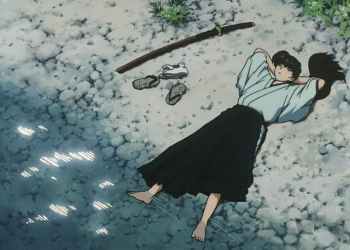 Japan is pretty hard on the feet.
Advertisement:

Until the abolition of the samurai class in Japan in 1868, a ronin ("wave man") was a samurai without a master, generally due to the former master's death, the individual ronin's disgrace, or the destruction of his lord's clan. Without a job, an income, or a home, ronin could and would spend their days Walking the Earth looking for a master willing to take them on. It was common for ronin to take positions as yojimbo (bodyguards), mercenaries, or become Ninjas. Others resorted to banditry, organized crime or piracy.

Although in ancient days ronin were considered a dangerous threat since it was believed they were likely to become bandits, the noble ronin is a common hero type in Japanese pop culture, typically acting as a Knight Errant. Since a samurai is defined by loyalty to his master, a samurai losing that master and struggling afterward for a purpose in life can make for a great Tragic Hero.

In the modern era, ronin has two additional, different meanings: either a student who failed his college/university entrance examinations but continues to study for a re-attempt instead of looking for a career elsewhere; or a salaryman who is temporarily between jobs.

See also the film Rōnin, the comic maxi-series Rōnin by Frank Miller, or the historical novel Ronin by Francisco Narla.

Compare Street Samurai, Samurai Cowboy, and Rogue Agent. Compare Dangerous Deserter for the less romanticized (and not necessarily Japonesque) version. A rough western equivalent would be the Black Knight (of the Real Life mercenary type, not the Tin Tyrant type.)

Other uses of the term Ronin