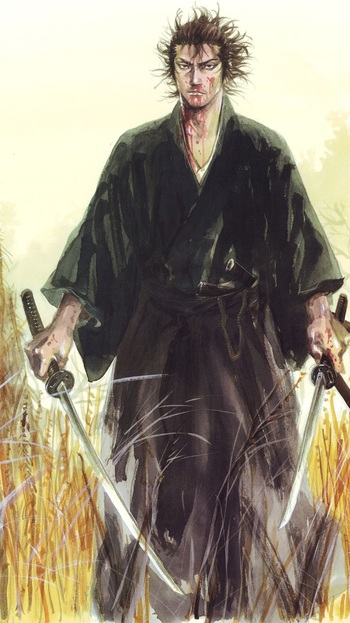 "I will become Invincible Under The Heavens!"
Takezō Shinmen: I left home knowing I'd never go back. From this day on... I'm a vagabond.
— Vagabond, volume 1, chapter 6
Advertisement:

A seinen manga about the legendary "sword saint" Musashi Miyamoto, said by many to be the greatest samurai of all time. Written and drawn by Takehiko Inoue, the author of the extremely popular Slam Dunk, this series boasts amazing artwork, an engrossing story, and some of the best Character Development seen not just in manga, but in any media.

The story itself is based on the novel Musashi, a semi-historical fictional account of Musashi's life. So while the series is firmly rooted in truth, artistic liberties were definitely taken.

The story starts with two 17-year-olds, Takezō Shinmen — a half-wild loner raised by the sword — and his only friend Matahachi Hon'iden. Having fought on the losing side at the Battle of Sekigahara, the young men struggle to survive until they're rescued by a girl named Akemi and her mother Okō, who make a living by robbing corpses. After Takezō and Matahachi save the two women from the Tsujikaze gang, Matahachi decides to elope with Okō to Kyoto instead of returning home with Takezō to his fiancée, Otsū.

Osugi Hon'iden, Matahachi's mother, refuses to accept this, instead blaming Takezō for her son's absence, which leads to a village-wide hunt for Takezō (not helped by his inhuman aggression and tendency to beat men to death with sticks). He's eventually captured by a monk using cheap tricks—namely convincing Otsū to track him down, knowing he'd lower his guard—and hung from a tree to think on his sins.

Unbeknownst to the villagers, the monk, the legendary Sōhō Takuan, frees Takezō after a few days, rechristens him as Musashi Miyamoto, and sends him off on the journey that changes him into a Living Legend and, eventually, the figure we know today.

Over the course of the story, some more characters make a name of themselves:Others, while never explicitly stated to have been born with such a gift, are shown (or stated) to be formidable fighters nonetheless, some of them having even won the title Invincible Under The Heavens: