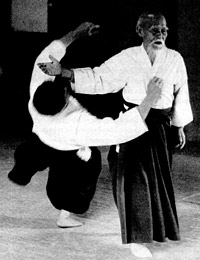 Morihei Ueshiba, founder of Aikido demonstrating the Offhand Backhand technique.
"What I learned today is that really old wizards don't get that way by being easy to kill."
— Black Mage, 8-Bit Theater
Advertisement:

Don't let his age (or his size) fool you; this guy is a force to be reckoned with. Despite being at least sixty years old, he (or she) is a formidable fighter who can take on several younger opponents at a time, clean the floor with all of them, and barely get winded. They may rely on years of training and deceptive strength, or cunning, but they get the job done. Obfuscating Stupidity comes as naturally to this guy as breathing. He might also have been a Badass Bookworm on the way there. Any physical decline he's suffered from advanced age simply won't matter, because he learned long ago how to defeat enemies who are physically stronger and faster than him. Often the Old Master will be more dangerous in his twilight years than he was at his physical prime because of this.

Break out the ^ sign on your calculator when this trope is applied to seasoned adventurers of any type; anyone who's managed to survive to a ripe old age while performing inherently dangerous work is obviously really damned good at it.

The Old Master is often the sensei to one of the main characters (often the name they give him), training them so they can pass on the torch to the new generation (and maybe earn themselves a break). To do so, the character typically prefers the Wax On, Wax Off approach to education and the When You Snatch the Pebble approach to final exams. Crueler or Good Is Not Soft classes of Old Masters, on the other hand, function as the Drill Sergeant Nasty, and those who study under him had better be prepared for Training from Hell. In short, this character can be of any moral alignment or ethnicity whatsoever.

Heavily overlaps with Hermit Guru and Stronger with Age. See also Old Soldier and When Elders Attack. They are likely to be Weak, but Skilled but that is an age-less trope. Retired Gunfighter is the western, weaponized version of this. Contrast with Older Is Better. In martial arts movies, especially, the Old Master tends to be a Magical Asian. In the Caper Crew makeup, he is the Legendary Thief. Don't be surprised if he's The Patriarch in a Badass Family.

Oh, there is one lesson that always tends to escape him: if his charges get hit enough times with any given tactic, they’re going to return it in full force… innocently and instinctively, at the worst possible moment.

He's mastered martial arts and his natural Furon psychic powers to the point of outright being able to pause time itself, a power he passes down to Crypto.

He's mastered martial arts and his natural Furon psychic powers to the point of outright being able to pause time itself, a power he passes down to Crypto.