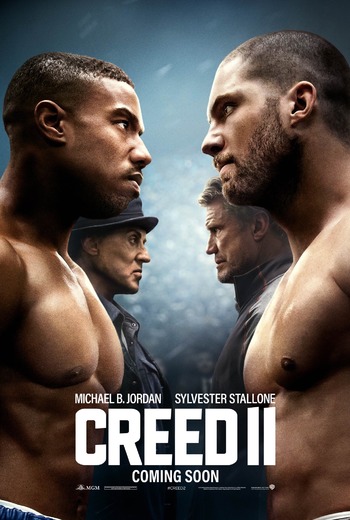 "It may not seem like it now, but... this is more than just a fight."
"It's no coincidence that Ivan Drago's son shows up right after Apollo Creed's son claims the belt. This is Creed versus Drago. This is the fight the whole world wants to see. And this is the fight he should take. Unless he's afraid of history repeating itself."
— Buddy Marcelle
Advertisement:

The one where Drago passes the torch.

Creed II is the sequel to 2015's Creed, the second Spin-Off of the Rocky franchise, and essentially the follow-up to Rocky IV, written by Sylvester Stallone and Cheo Hodari Coker and directed by Steven Caple Jr.

Life has become a balancing act for Adonis Creed (Michael B. Jordan). Between personal obligations and training for his next big fight, he is up against the challenge of his life. Facing Viktor Drago (Florian Munteanu), an opponent with ties to his family's past since he's the son of Ivan Drago (Dolph Lundgren), only intensifies his impending battle in the ring. Rocky Balboa (Stallone) is there by his side through it all and, together, Rocky and Adonis will confront their shared legacy, question what's worth fighting for, and discover that nothing's more important than family.

The film was released on November 21, 2018. A sequel, to be helmed by Jordan in his directorial debut, will be released on March 3, 2023. The sequel is set to be the first film in the Rocky universe without Rocky Balboa himself; Stallone has left open the possibility of continuing Rocky's story in a film separate from the Creed series.