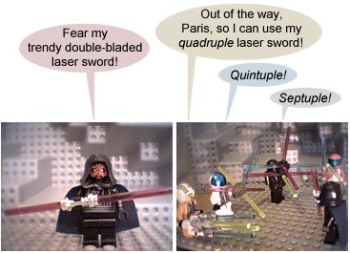 Wait 'til you see the centuple one. Fun fact: This was actually written before Revenge of the Sith and The Force Awakens, which featured a character wielding four lightsabers at once, and a lightsaber with two cross guard beams in addition to the primary beam, respectively.
"Kara, when I started living this life it was just me and I was going up against human threats. That I can handle. Then it was the metahumans and I can handle that. And now I learned that there are multiple Earths and I was brainwashed aboard an alien spacecraft."
— Oliver Queen (to Kara Danvers), Legends of Tomorrow
Advertisement:

This isn't meant to be confused with the buildup to season finales or a plot climax, but rather a consistent escalation in events that always exceeds what a viewer would expect. When this is done well, a new Moment of Awesome is, at any given moment, just around the corner. When done poorly, what would constitute as a Moment of Awesome can feel ordinary, or even absurd.

For events that are impossible, go to Beyond the Impossible.