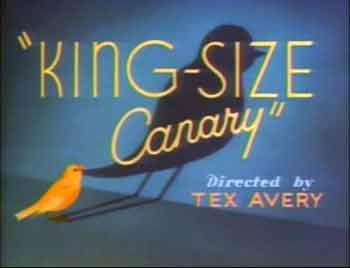 Don't let the title card fool you — the canary does not actually look like this in the cartoon itself.
Advertisement:

A landmark 1947 Tex Avery cartoon made during his MGM tenure during The Golden Age of Animation, said to have been one of his personal favorites of his own. This oneshot short revolves around a hungry cat who, in an attempt to get more meat out of a pea size canary snack ("Well... I've been sick."), pours a bottle of Jumbo Gro Plant Growth formula on him - only to make him grow to gargantuan proportions. The tables keep turning and turning as one of the other keeps drinking more of the formula as their battle continues. Obviously, Hilarity Ensues.

The plot was recycled for the Sylvester the Cat and Tweety Bird short Hyde and Go Tweet in which Tweety Bird accidentally drank Dr. Jekyll's formula, much to Sylvester's confusion. It was also recycled in an episode of Darkwing Duck, when Darkwing and a villain fought over a growth ray and grew so huge they were bigger than the planet they were on.