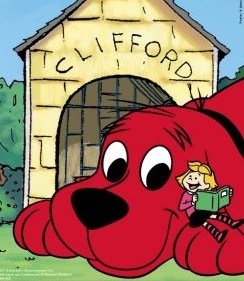 A giant canine. Any canid will do: domestic dogs, wolves, coyotes, foxes, etc., as long as it's far bigger than any in real life. Temperament varies from the Angry Guard Dog on the one end to the Big Friendly Dog on the other, but since an animal's size is more often than not perceived to be proportional with how dangerous it is, the former tends to be more expected... which can make subversions all the funnier when a supposedly dangerous giant dog/wolf turns out to be as cute, playful and benign in behavior as your average puppy.

May or may not be a case of Animals Not to Scale, depending on what real-life species (or, in case of domestic dogs, breed) it most closely resembles, if at all.

A Sub-Trope of Dire Beast. A Sister Trope to Mega Neko, Rodents of Unusual Size.

Compare Precious Puppies, Hellhound, and Cute Giant. And who's afraid of The Big Bad Wolf?

Skoll is the Heartless of Prince Hans of the Southern Isles, taking on the form of a giant phantom wolf.

Skoll is the Heartless of Prince Hans of the Southern Isles, taking on the form of a giant phantom wolf.