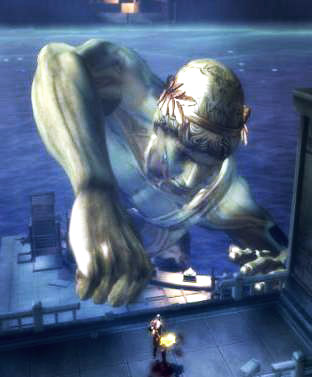 Kratos finds himself caught in the shadow of the colossus.
Advertisement:

Living statues are a varied league of fantastic artificial creatures. Common roles they fulfill are as guardians of places of importance, as doomsday devices Hidden in Plain Sight, and as (wanted or unwanted, but Always Female) romantic partners. The size of living statues and the material they're made from, which is usually stone or metal, means immense strength and endurance are a likelihood as long as the Conservation of Ninjutsu is not in effect. How a living statue comes to be differs per story.

In case the origin lies with the statue, a regular statue is cursed, enchanted, or haunted. The latter is particularly likely to happen between the statue likeness and the soul of the same person. A special case is when the statue doesn't necessarily house the soul, but does serve as its anchor. This always requires the statue to be of the soul's owner. Think of it as a statue being in a permanent state of Astral Projection. In some cases, the statue doesn't just anchor the soul, but is what calls it back from the dead.

A living statue could be a robot or a golem if they spend time in the role of statue, such as lying in wait for trespassers. Another possibility is for a statue to be the starting material for either. All that said, the distinction between a living statue and a golem is flimsy. Generally speaking, a living statue has an artistic element to it that informs its shape, whereas a golem will be more rudimentary of form.

A third possibility is for someone to be turned into a statue. Take note that if this is a regular statue it's Taken for Granite, which is not a living statue, while if they retain their awareness but cannot move the result is a living statue. In the opposite scenario, where a statue being brought to life becomes organic, it still qualifies as a living statue until it takes successfully part in a Pinocchio Syndrome plot.

Living statues are a common occurrence in European or American action stories set outside of the West because they make for recognizable creatures that still come across as native to the setting. Kali statues are a notable example of that, foregoing the actual goddess in favor of her image.note The origin of this appears to be Gunga Din, which doesn't feature a living statue but does create an association between Kali(like) statues and the occult. Another noteworthy case of living statues occurs when a mythological creature is exclusively present in history as a statue. While the creature may not be meant to be a living statue, the association is a strong one and fiction may choose to merge the two. Gargoyles and other grotesques are the prime example of this phenomenon.

There are many different types of statues made for different purposes by different cultures in different periods from different materials. Which is why Living Statue is a busy Super-Trope, covering Our Gargoyles Rock, Living Figurehead, Eenie, Meenie, Miny Moai, and technically Snowlems and Scary Scarecrows. In turn, it's a Sub-Trope to Anomalous Art. Might be a specific version of Chekhov's Gun in case of Mistaken for Granite and Weaponized Landmark. See also Taken for Granite, Sculpted Physique, Nobody Here but Us Statues, Pygmalion Plot, Genius Loci and Terrifying Tiki. Depending on the material the statue is made of, further see Rock Monster or Treants.