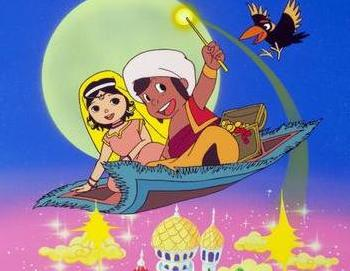 Arabian Nights: Adventures of Sinbad (アラビアンナイト シンドバットの冒険, Arabian Naito Shinbatto No Bōken) is an anime series produced by Nippon Animation which was first aired in 1975.

The story goes: Sinbad is a young boy and the son of a famous merchant from Baghdad. Sinbad especially enjoys listening to the adventure stories of his uncle Ali, who has given Sinbad a speaking mynah bird with him from his journey (which Sinbad had named Shera, after the mysterious girl he had just seen in a dream).Sinbad decides to joins his uncle and in hope of being a part of his uncle's next adventure. After a giant whale attacks the boat, he ends up alone on a deserted island. Sinbad begins the adventure alone with only Shera for company. When he returns home from his first adventure, he finds to his shock that his parents are missing, since they have gone to find him and were apparently lost at sea. Inheriting their fortune and determined to become great merchant just like them, Sinbad sets out again in search for adventure.

Throughout the series Sinbad journeys to different destinations together with Shera and his friends — a youth named Ali Baba who's good at using ropes, and a wise old man named Aladdin. They encounter a number of strange creatures, including giant birds, gigantic snakes, mermaids, genies, Lilliputians, and hostile magicians. He also meets several other characters and enacts stories featured in the Arabian Nights, including the Forty Thieves, the stories of The Genie and the Merchant, and the Flying Horse.