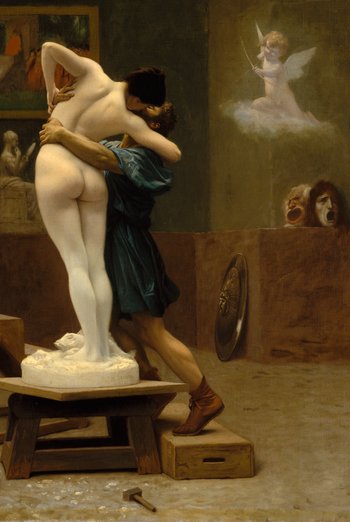 Let's just say that Cupid's arrows work on more than humans...
"Real isn't how you are made," said the Skin Horse. "It's a thing that happens to you. When a child loves you for a long, long time, not just to play with, but really loves you, then you become Real."
— The Velveteen Rabbit
Advertisement:

When one or more characters invest a lot of love and energy into an inanimate object, it comes to life in response thanks to The Power of Love. It's usually a Pinocchio type situation where it's still not an organic, living being, but it's now animate in the Living Toy or "Disney talking furniture" sense. Living Toys usually have this as the backstory for why they're, well, living toys. Usually the newly animated object doesn't need more love in a Gods Need Prayer Badly sort of way, but they all usually reciprocate the feeling of love with their "parent" and would be saddened if they stopped being loved (or worse, were treated as freaks for being alive).

Compare Spontaneous Generation and Sentimental Shabbiness. See also A Boy and His X (this trope being what creates the X). Distantly related to Humanity Is Infectious.

Frosty gives his snow wife Crystal a bouquet of frost flowers to show his love for her, which in turn makes her all living.

Frosty gives his snow wife Crystal a bouquet of frost flowers to show his love for her, which in turn makes her all living.