Literature / The Adventures of Pinocchio 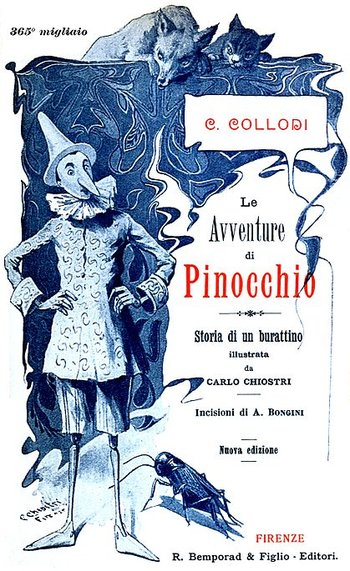 The Adventures of Pinocchio (Le Avventure di Pinocchio, AKA Storia di un Burattino ("The Story of a Marionette") is probably Italy's most famous Fairy Tale, first published in 1883. Its author, Carlo Collodi (Pen Name of Carlo Lorenzini), wrote a great deal for children, but Pinocchio is the only one of Collodi's tales to have been translated into the English language.

An old Italian woodcarver, Geppetto, receives a piece of wood which looks perfect for making a puppet. The wood is magical, and the puppet comes to life. Geppetto calls it Pinocchio (which means "pine nut") and tries to bring it up as his son. Yet the task is anything but easy, as Pinocchio tends to be cheeky, naughty, disobedient, and all too susceptible to the bad influence of liars and false friends. Pinocchio tumbles from one disastrous adventure to another, but things take a turn for the better when he meets the Blue Fairy, who promises him that he can one day become "a real boy" if he changes his ways.

In 1940, Disney made an animated film based on this story, simply called Pinocchio. It scores somewhere between a 1 and a 2 on the Sliding Scale of Adaptation Modification, retaining only a handful of characters (but altering the personalities of most of them drastically) and a few basic plot elements. In 1936, Aleksey Nikolayevich Tolstoy published his retelling of the Pinocchio story in the Soviet Union called The Golden Key, or the Adventures of Buratino. An Italian animated adaptation was made in 1972 called, Un Burattino Di Nome Pinocchio (A puppet named Pinocchio), which is noteworthy for being the most book accurate adaptation of Collodi's story, probably helped by the fact that the author's grandchildren—Mario and Antonio Lorenzini—advised the production.

Since it's in the public domain, you can read it here.

The Adventures of Pinocchio features these tropes: